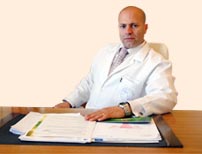 Dr. Najib Dagher started his medical studies in Bordeaux – France. He obtained his MD degree and then a specialty in Obstetrics and Gynecology as well as REPRODUCTIVE ENDOCRINOLOGY - HUMAN REPRODUCTION - Infertility & IVF in 2006.

He then pursued his carrier in many Hospitals in Lebanon. He occupied in 2007 - 2012 the position of medical and administrative assistant of the chairman of the board of the “Clinique Du Levant” hospital in Beirut. Also, in 2013 Dr. Dagher started to work in Erbil as Medical director & specialist in Gynecology – Obstetrics and erectile dysfunction in men, at “Lebanon Global Clinic”, Erbil-Kurdistan-Iraq.

He then occupied the position of Deputy Medical Director of IVF Lebanon in Beirut - Hazmieh until February 2018, where he was also consulting and treating infertility patients since 1st of January 2014 until now.

He also obtained in July 2018 a University Diploma in “Infertility, Assisted Reproduction Technology (ART) & Endocrinology of the reproduction at Foch hospital by the University of “Versailles Saint Quentin en Yvelines” in Paris – France.

He is a member of "Clinica Tambre" Madrid - Spain as well as "IVF Lebanon" - Hazmieh Beirut since February 2018.